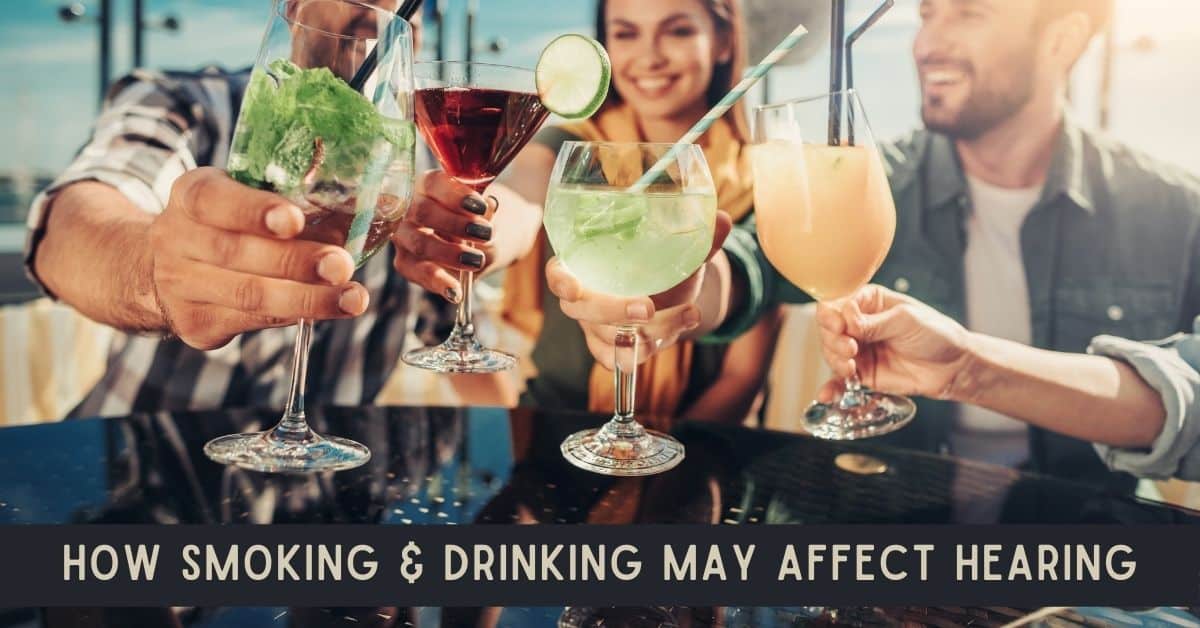 Lifestyle habits undoubtedly affect our risk of hearing loss. In the first place, the willingness to use hearing protection and to avoid noise exposure are both directly related to rates of hearing loss. However, indirect effects are evident, as well.

Health conditions such as cardiovascular disease and diabetes have been correlated with hearing loss. Although it is unclear how the connection works, we know that these health conditions are at higher percentages among those who have hearing loss than those who do not. For this reason, many researchers suggest that there may be a connection between healthy habits such as nutrition and exercise and lower rates of hearing loss.

With such uncertainty in the science of hearing loss prevention, we are curious to know for sure which conditions are likely to cause or exacerbate hearing loss. Let’s consider two lifestyle habits with quite different levels of certainty when it comes to hearing loss: smoking and alcohol consumption.

When it comes to smoking and hearing loss, the connection is relatively clear. Rates of hearing loss are much higher among smokers than non-smokers. The strength of the relationship is up for debate, but one study demonstrates that smokers have up to 70% higher risk of hearing loss, a striking and powerful statistic.

Some have questioned the nature of these studies, wondering if an uninvestigated third factor might be at play. For instance, if those who are smokers were also more likely to expose themselves to noise in the form of loud concerts or events, then the real cause would be those noise events rather than smoking itself.

Nonetheless, there is scientific theory connecting smoking directly to hearing loss. The tiny hairlike organelles of the inner ear require oxygen for prime functioning, and smoking might limit the amount of oxygen in the bloodstream. If that were the case, then smoking would have a direct causal effect of making people develop hearing loss. We know that many negative health outcomes are associated with smoking, so there is really no health-based reason not to take part in a smoking cessation plan right away.

When it comes to alcohol consumption, the results are more equivocal. A study out of Germany at the University of Ulm identified that both heavy and social drinking were related to BAEP levels (Brainstem Auditory Evoked Potentials). They tested the level of damage in the part of the brain that makes hearing possible. The results did not only find a relationship in the brain but also in the ears. Just like smoking, they found that drinking had a direct effect on damaging the tiny, delicate hair cells in the cochlea of the inner ear. If we stopped asking at that point, then the relationship would seem clear.

However, a countervailing report found that drinking might actually have a preventative effect when it comes to hearing loss. A large study led by researchers in the United Kingdom and United States, published in the Journal of the Association for Research in Otolaryngology found that not only low levels of alcohol consumption but even heavier drinking could have a preventative effect on hearing loss.

This study made researchers ask if there is something unusual about people who are lifetime non-drinkers. It seems that this group was significantly more likely to have hearing loss than those who took part in some kind of drinking at some point in their lives. What might lead a person who never partook of alcohol to develop hearing loss?

With conflicting information about the causal and preventative approaches to hearing loss, it is more important than ever to rely on the preventative habits that are well known. Wearing hearing protection, such as earplugs, in noisy environments and limiting exposure to noise are two of the soundest approaches to hearing loss prevention that we know.

If you are concerned about your hearing abilities, contact us today. You can begin the search for hearing assistance by scheduling a hearing test. This diagnosis will point you in the direction of the resources, information, and expertise you need to find solutions.