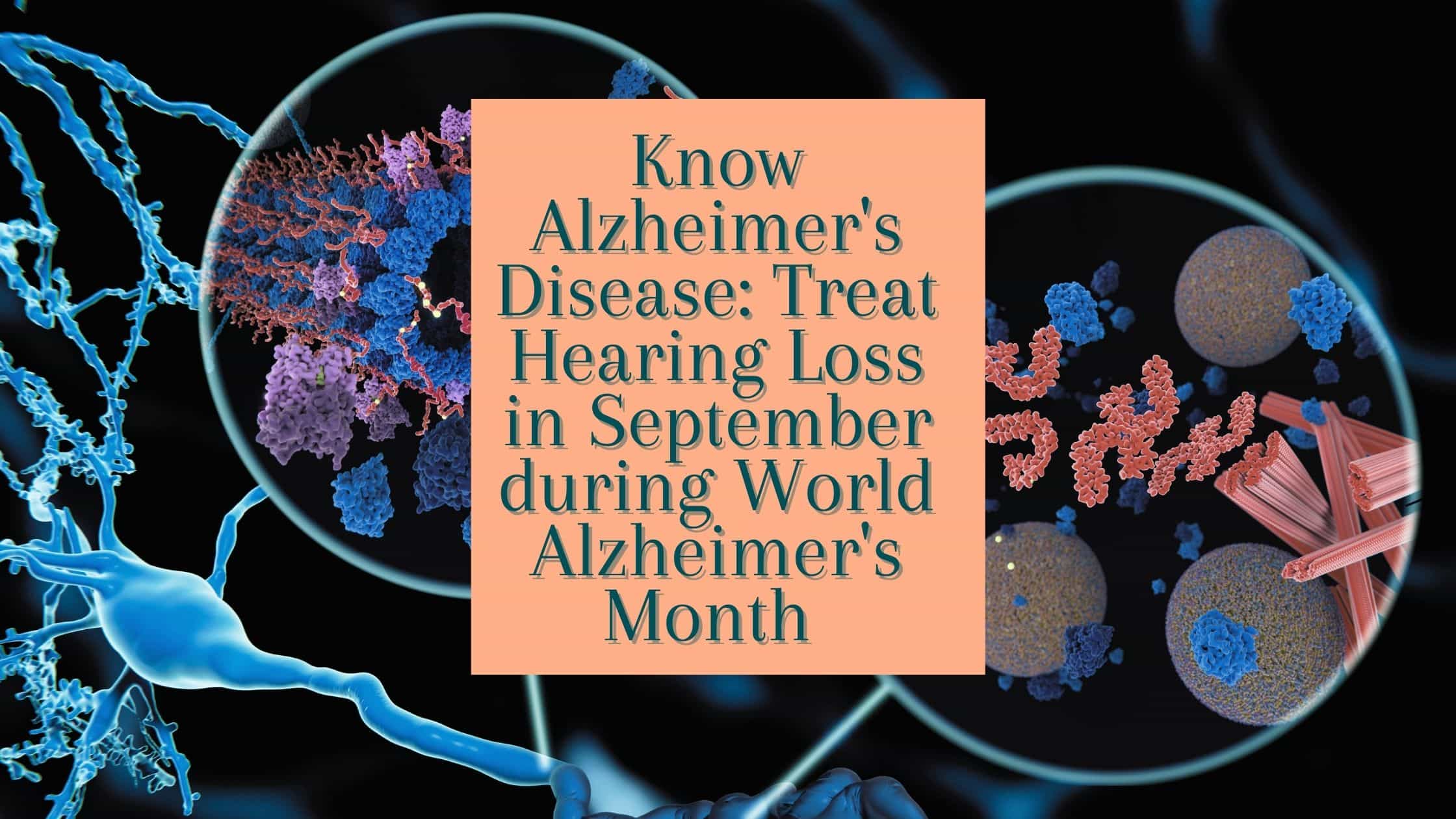 September is World Alzheimer’s Month! Started in 2012, this global awareness and advocacy campaign focuses on challenging the stigma associated with dementia. Dementia refers to  a group of medical conditions that progressively reduce cognitive functions including: thinking, memory, learning, and decision making. Worldwide, 50 million people live with dementia, a number projected to increase.

The most common form of dementia is Alzheimer’s disease which accounts for up to 90% of the dementia that people navigate today. Alzheimer’s does not have a cure or exact causes so significant emphasis is placed on identifying and mitigating risk factors. Extensive research shows that hearing loss increases the risk of cognitive decline and developing associated conditions like Alzheimer’s. So a useful way to protect brain health is by treating hearing loss!

Alzheimer’s is a neurodegenerative condition that leads to a decline in cognitive capacities over time. Typically starting with subtle memory loss, Alzheimer’s can evolve into difficulty remembering loved ones, ability to learn, make decisions, communicate, and complete tasks. As people experience greater challenges with navigating and managing daily life, they may require care. The number of people living with Alzheimer’s in the United States is growing rapidly. According to the Alzheimer’s Association, 6.2 million people currently live with the condition. This is projected to more than double by 2050, reaching 12.7 million people.

Though exact causes of Alzheimer’s are unknown, vast research identifies helpful interventions that may prevent or delay its development. This includes identifying and treating hearing loss, a chronic medical condition that is linked to cognitive decline.

An estimated 48 million people in the U.S. have some degree of hearing loss. Impacting nearly 1 in 5 people, hearing loss is a pervasive medical condition. There are several factors that can cause hearing loss including:

Hearing loss can be experienced mildly to profoundly, disrupting daily life. Additionally, untreated hearing loss can impact overall health in a variety of ways including contributing to cognitive decline.

Studies show that there is a correlation between hearing loss and dementia. Research reveals that hearing loss affects the brain in ways that can contribute to the onset of Alzheimer’s. This includes a 2019 study that involved over 10,000 participants (ages 62 and older) who did not have initial cognitive concerns. After 8 years, researchers found that cognitive decline was 54% higher among people with severe hearing loss compared to those without hearing loss. This highlights a significant link between both conditions which impact older adults disproportionately.

Researchers suggest that hearing loss not only happens in the ears but also the brain. The areas of the brain that are responsible for language and processing sound can become inactive as a result of hearing loss. THis inactivity can reduce cognitive function and also lead to other parts of the brain intervening to compensate. This then could also lead to cognitive overload, also impacting brain health.

Treating hearing loss not only transforms hearing but also enhances brain health. The most common treatment for hearing loss is hearing aids which are electronic devices that provide ample support with processing sound. This improves cognitive capacities and reduces the risk of cognitive decline. You can prioritize your hearing health today by scheduling an appointment for a hearing test!