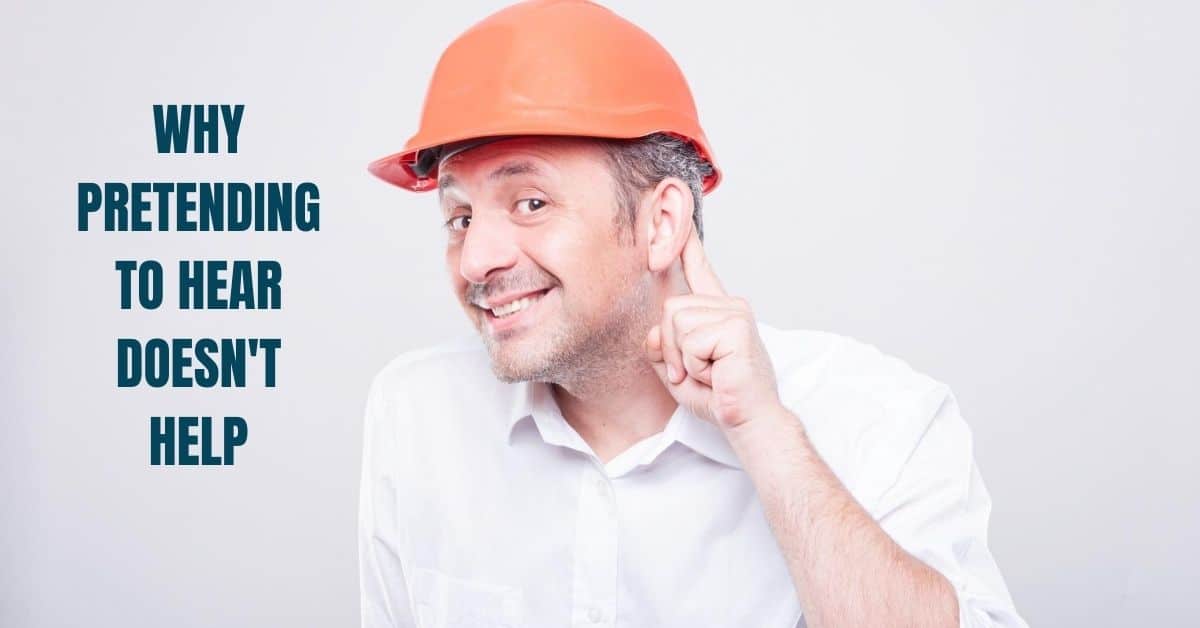 You’ve probably been on one or the other side of this conversation before. It starts out easily with some basic back-and-forth pleasantries, but before you know it something is missing. You felt like you understood one another in the beginning, but at some point it became clear that the signals were crossed.

Maybe one of you answered a question with something that just didn’t make sense, or perhaps the other speaker said something that didn’t fit with the context. It is remarkable that both sides of this conversation look so similar to one another when only one of the two has hearing loss.

In a conversation, it is essential for both parties to share a general consensus over the meaning, and both can easily feel a breakdown in communication at the same time. This situation tends to result from someone with hearing loss pretending to be able to hear. Whether this “pretending” is conscious or subconscious, the result is that the sharing of information doesn’t happen.

Let’s consider some of the reasons that a person might pretend to hear, the problems with that strategy, and what can be done instead.

Why People Pretend to Hear

Playing along with a conversation might feel at first like the path of least resistance. In some instances you can get by with general answers, and you might be able to put together the pieces well enough to make do.

Often it seems like the simplest way to end an awkward situation, and some people even tend to drift off at the end and never acknowledge the difficulty. One of the most common reasons people pretend to hear is that they are engaged in a group conversation and feel like they can blend into the scenery.

Without actively participating or explaining that they can’t hear, people with hearing loss sometimes allow themselves to observe a conversation as if from a distance.

Problems with Pretending to Hear

If you are in a one-on-one situation, pretending to hear tends to become obvious. At some point the other person will ask a question making it clear that you haven’t been getting the information all along. Or, perhaps, you will add to the conversation with something that makes sense to you, given what you have guessed about what’s going on, only to find in the other person’s expression that it doesn’t fit with what they were saying.

In the case of a group conversation, there are many problems with sitting on the sidelines like an observer. Not only can this strategy have a bad effect on your emotional wellbeing, but it can also be a strike against your cognitive health.

If the conversation shifts to you at some point, it can also hurt the feelings of others who had assumed you heard everything said so far. Sometimes important information is exchanged in conversations that you were unable to hear and therefore unable to use going forward.

Alternatives to Pretending to Hear

Rather than pretending to hear another person and hoping for the best, there is a simple two-part approach you can take. First, simply state that you aren’t able to hear. The sooner you mention this to the other person, the better for both of you. If you can frame it in terms of an ongoing condition, you will have a better chance of being accommodated in the future. For instance, rather than simply saying, “I missed that,” mention that you are hard of hearing or have hearing loss.

The second important step is to suggest something that would make it easier for you. Not all limitations can be solved easily, but there are basic steps others can take in most situations to make it possible to communicate.

Each social context and each person’s form of hearing loss are unique. For some people the accommodation might have to do with standing closer, while others might need the speaker to look in the listener’s direction. No matter what you request for help, the important thing is to move beyond the point of pretending. Once you make it clear that you have trouble hearing, the responsibility for discovering a better communication style shifts to both people in the conversation.

If your hearing abilities have changed, a far better solution than pretending to hear is to seek treatment! Top-of-the-line hearing devices are available to help you stay in the conversation. Schedule a hearing test and have a consultation with one of our professional hearing specialists.